A year after this journey began, we decided to go back to where it all began:  The Ronald McDonald House in Cincinnati. We set up an activity during the summer camps being held at the House and offered to meet with the families attending that day. After two hours of interviews, we left with our minds filled with ideas and our hearts full of excitement to turn four amazing children into the heroes of their own books. 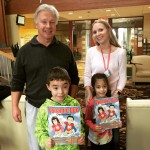 First, we met twins who couldn’t be more opposite! Logan and Sophia were in town for hospital procedures for Logan. Logan is in and out of hospitals but, with his trusty twin Sophia by his side, they are unstoppable. When they aren’t traveling to meet doctors and receive medical treatments, Logan and Sophia love playing together. When we learned how much they love animals and their new bunk beds, we knew exactly how to turn them into super sleuths! With magical bunk beds and their differing talents, Logan and Sophia work together to solve the toughest mysteries and save animals around the world. We loved working with these two because there was no limit to the journey into their imagination! Shortly after the New Year, they were back in town for more hospital visits and we met up with them to give them their book. Logan was suddenly excited about his surgery the next day because he couldn’t wait to show his doctors and nurses his book, Dynamic Duo Detectives.

The next family we met with was missing one member – Blake. He was in the hospital recovering from a heart transplant. 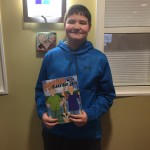 You see, life was very typical for Blake and his brother, Zach. They loved fishing, playing sports, being outdoors and being kids. However, within a few weeks, their lives were turned upside down as Blake suddenly became sick and doctors realized that his heart was failing. After receiving a new heart, Blake grew stronger and realized how quickly life can change. Since he wants to be a nurse when he grows up, we decided to make his book one of reflection. Blake, a nurse, and Zach, a farmer join their parents for Sunday meals each week and reflect upon how much they overcame together, as a family. We hope this book, Fishing with Blake and Zach, reminds Blake that it’s not what happens to you but how you overcome it that makes you a hero. We thank him and his family for allowing us to share your courageous journey! 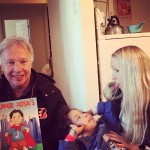 Finally, we met with Josh and his mom, Christy. Josh has spent his entire life in and out of the hospital battling a very rare genetic disease. Yet, through it all, his sweet soul has brought smiles, laughter and fun to everyone he meets. Josh loves pretending to soar around with a cape, so we turned him in to a super hero! With his bright red cape and trusty sidekick by his side, Super Josh uses his super power to bring happiness to people he meets in the hospital. We had the chance to deliver his book, Super Josh’s Super Power, just a few days before Christmas. Through tears, his mother said that this was the best gift of all. Thank  you, Super Josh for brightening our world with your spirit and for being such an inspiring young man!

Well, one might think that writing these books would be enough to keep us busy, but we couldn’t help but be excited 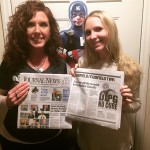 when our friends from the KylerStrong Foundation reached out for help on a very special project. They wanted to create a license plate to help raise money for DIPG. This would be sold in Ohio, but they faced a few hurdles. First, they needed a design that would do our friend, Kyler, justice. (That’s where we came in!) We wanted to have a super hero who resembled Kyler yet could be anyone’s child. He needed to look strong but concerned. The goal: help raise awareness for this very serious disease which is hugely lacking in research and funding. After we came up with the design, the next hurdle was getting it passed on the floor of the Senate. Well, not surprising, it unanimously passed. We can’t wait for Ohio drivers to purchase their license plates soon! 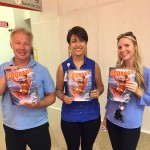 Finally, our last big project in 2016 was donating copies of Courage, The Diabetic Superhero to Cincinnati Children’s and Indianapolis Children’s Hospital. While we aim to write books for individual children to bring back much-needed smiles, we also want to reach larger groups of kids to help them on a bigger scale. We know we can’t write books for every single child battling a life-threatening illness, but this is one way we hope to reach as many children as possible. We have many projects like this lined up for the future and can’t wait to bring smiles with them very soon.

We can’t explain how happy this year has made us. If you look at the faces in these pictures, they aren’t filled with pain, sadness or fear. They are smiling, and that’s all we every hope for in everything we do.

2016: A dynamic duo, a fishing family, a super son, a high-flying hero and a lot of courage!