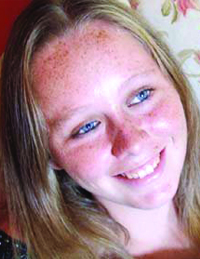 A friend to everyone. That’s how Nicole’s parents describe their daughter. That became very clear as we sat down to write and illustrate this book. We heard from her family, friends, classmates and teammates and learned that this woman truly left an imprint in the hearts of everyone who knew her. Here are a few stories they shared:

“Here’s one of my favorite funny stories about Nicole. Patrick and I were playing in a band many years ago when he and Nicole were still dating. The guy we played music for could be a little full of himself. One time, he was bragging about his new blue jeans. Nicole noticed there were jewels on the rear pockets. With her no-nonsense humor, she announced, ‘Those are girls jeans!’ Well, needless to say, all of us had a great laugh.” – John, brother-in-law

“I’ve always told these two stories about Nicole, even to my kids. One time, we had a sleepover at my house and decided to sleep out in the RV to feel independent. We were laying on the bed with a sheet over us and Nicole said, ‘Are you tickling my feet?’ I told her that I wasn’t and I started laughing. It was just an odd thing for her to say. Well, she repeated herself like five times, getting louder each time. She shined her phone light on her feet and there was the most adorable little field mouse sitting straight up and looking at us. We screamed like it was going to eat us. She has a louder scream than me, for the record! Another time, we were going somewhere. We got in her red car with the sun roof but she got out slowly. Then she said, ‘Don’t freak out but there’s a giant spider crawling on you.’ At this point, it was on my shirt. We took off screaming. We searched that car for a good 30 minutes looking for it. I miss Nicole so much. She was always honest, respectful and responsible. Her honesty was the key to her humor. The way her eyes smiled with her mouth. She was just an angel on earth.” – Ashley, friend

“I’ll never forget one Halloween. We must have been around thirteen and thought we were so cool to go out on our own. We thought we would play dingy dong ditch, but Nicole fell. Next thing we knew, we saw this look of terror on her face when she knew she would get caught. She said, ‘Run for it!’ Then, Nicole rolled and army crawled into the grass to hide behind a mailbox post. I’m not sure why she thought the mailbox post would hide her! We didn’t get caught but couldn’t stop laughing for hours.” – Geri, friend

“My fondest memory is when Nicole and I pitched our way to a sectional title. Nicole and I were never supposed to be pitchers. We hadn’t really ever focused on that position because we were better fit for the corners. She was a better first baseman, and I was a better 3rd baseman. However, both of us found ourselves pitching our senior year in high school. We were a great duo, and I was glad to share the mound with her. With the talent we had behind us on the field, we (somehow) won sectional, and it made our senior year all the better.” – Kristen, friend/teammate/co-coach

We hope this book shares Nicole’s friendly personality, loving spirit and incredible sense of humor in a way that brings smile and laughter the same way Nicole did. 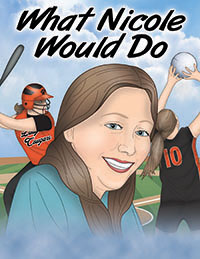 This sale will run until August 10th!

Please note: Books will ship approximately one month after the sale ends. Thank you!