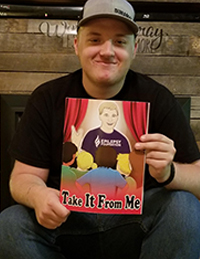 Doctors diagnosed Drew with epilepsy. He endured many more seizures, procedures and even major brain surgery. Life as he knew it changed forever.

He would no longer be able to do things kids his age were doing, including learning how to drive a car. He felt alone and depressed.

However, after attending a camp for kids with epilepsy, Drew met others who he thought had it worse than he did. This realization inspired him to join Teens Speak Up! Through this advocacy program for the Epilepsy Foundation, Drew went on a trip to Washington, D.C. and organized events to raise money for others to attend epilepsy camp. He even started mentoring kids with epilepsy before their own surgeries.

With his amazing sense of humor, Drew has turned having epilepsy into a way of giving back and inspiring others. Bob and I learned about Drew from his mom, Hollie. We quickly realized how much people look up to him, but wondered if he realized this. By incorporating letters written by his friends and family, we hope he sees how much people look up to him. We hope Take It From Me helps share his important message: just because life may look different than it did doesn’t mean it can’t still be a good one.

Take It From Drew