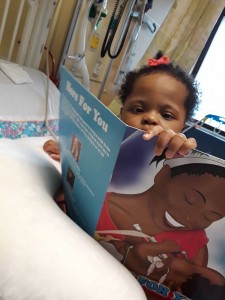 Here for you. Those three words can mean so much to people when they are going through difficult times. When Carrolle learned that she was expecting a baby girl, she instantly began dreaming about their life together.

However, it became clear early on in her pregnancy that her unborn daughter was facing medical challenges that would be life-changing. What should have been a happy time for this new mom quickly turned into a nightmare.

Kaelle Solange Morisset was born weighing three pounds with a grade four cleft palate and a flappy airway. For the first four months of Kaelle’s life, she was too fragile to be held. Carrolle and her husband, Ricardo, could only touch her hands, her feet, and lay their chests next to their daughter. Eventually, Kaelle’s doctors decided to give her a tracheostomy to help her breathe. While this procedure saved her daughter’s life, Carrolle was met by much misunderstanding from family, friends and even strangers who thought this was a step backward for Kaelle. When we met with Carrolle about writing a book about Kaelle, her goals were much bigger: to educate others. She explained: 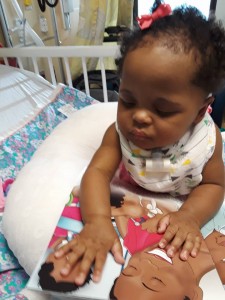 “Life changes for people every day. Just because you don’t understand what they are going through, your approach can be hurtful. Don’t look forward to the next hurdle for people, let them be happy for the progress that has been made. Live in the moment, grab it, celebrate it and be thankful. While you are complaining about what you want to happen sooner, someone else is wanting what you have now.

Every scar in Kaelle’s body is beautiful. She is here because of them. Scars are a gift of life. For parents going through tough times, take it one day at a time. There are amazing people who want to help you along the way – let them. It may not be the life you dreamed of, but it will get better.”

We hope that Here for You reminds parents in similar situations that they are not alone and helps bring some understanding to people who have never walked in their shoes. Thank you for supporting Kaelle and sharing the inspiring message of a mother who understands.

The Strength of a Mother