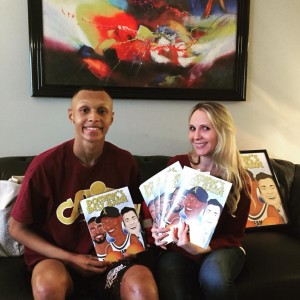 Bob and I first met Dominic when we went to his house to interview him for his book. His smile lit up the room as soon as we walked through the door. He had been declared “cancer-free” for the second time a few weeks prior to our visit. He told us about what it was like to be a great athlete and a normal kid and then to have that all change in one day. He didn’t dwell on how sick he was or how bad he felt, but instead he talked about the nice things people did for him. When we left Dominic’s house, we had a plan.
Unfortunately, just as it had done the first two times, cancer had another plan in mind when it came back in Dominic’s leg and lymph nodes for the third time. While Dominic is preparing to fight for his life for the third time, I can’t help but think about how unfair life can be. Here is a very kind and charismatic teenager who has a personality that makes you feel like you’ve known him for years. But not Dominic. He is looking forward to tomorrow and doing what he needs to do so he can have his life back once and for all. Even if that means turning 18 years old and going in for surgery the very next day to amputate your leg. Brave doesn’t begin to define him.
Dominic loves Kyrie Irving, watching Jimmy Fallon and playing sports. Through his book, Dominic’s Best Game, we found a way to tie those three together while conveying his strength and positive attitude. I have had the pleasure of working with many children battling life-threatening illnesses, but Dominic’s spirit and energy can’t help but make me smile more than I ever have, even if the reason we met is heartbreaking.
Thank you for supporting Dominic by purchasing a copy of his book and helping him share his story. We hope you enjoy reading about him and, if you have never met him, you feel as inspired by him as we do.
Gratefully,
Sarah
When staying positive is a way of life.